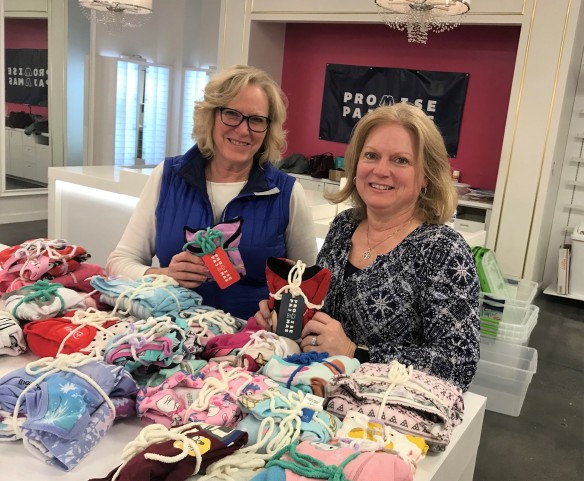 Debbie Vehr and Valarie Ross are cofounders of Promise Pajamas

The Charlotte-Mecklenburg Housing and Homelessness Dashboard reported more than 3,500 homeless people living in the Charlotte area in December 2019. Many of those affected include families with children.

Various organizations work towards prevention and assistance offering food, shelter, clothing and necessities. Promise Pajamas is one of those organizations reaching out on behalf of the children. Spearheaded by cofounders Valarie Ross and Debbie Vehr, the pajama project is only in its second winter, but is growing by the numbers.

Donated pajamas are collected throughout the year with ramped up efforts nearing December, when they are distributed to kids who need them. The pajamas were given out the last two Decembers, but the project has now snowballed further into the winter season.

The non-profit provides pajamas for kids ages 2 to 14. A few years ago, Ross volunteered with The King’s Pajamas, another local charity that provided pajamas to kids in need. Once the organizer moved out of state, Vehr approached Ross to find out what happened to The King’s Pajamas. “It had been on her heart and mind,” Ross said. “After I shared how the project had ended, and after much prayer and discussion between both of us, we decided to start anew with Promise Pajamas as cofounders.”

The two recognized a need and decided to do something about it. Their passion to help others is evident.

“We talked, and it kind of evolved,” Vehr said. “Valarie and I talked more about it [Promise Pajamas] and decided to move forward.” The two cofounders are friends who met at Matthews Methodist Church.

To begin with, the business part was taken care of like getting established as a 501(c)(3). A Board of Directors comprised of seven members was formed. Through speaking events and collection boxes, they helped get the word out.

Donation boxes were placed in various businesses to help with collections. In 2019, the boxes were set-up at 32 businesses throughout Union, Mecklenburg and Cabarrus counties. In addition to the boxes, there are other activities to keep the pajamas rolling in and organized. “I counted 17 total activities, whether they were drives, or folding parties or both,“ Ross said.

In September, a fashion show fundraiser, dinner and silent auction event was held at Matthews Methodist Church. “We were blessed to have right at 150 people in attendance,” she said.

The first year, 750 pajamas were collected and distributed to homeless and underprivileged kids in the greater Charlotte area. The second year (2019), more than 1,500 pajamas were given to kids in need. Over 2,000 pajamas were donated, so the efforts didn’t stop in December. Needs are on-going. It becomes a juggle to match sizes with needs, so the leftover pajamas are held in storage for later distribution. “We collect all sizes from 2 to adult,” Ross said. “Although we serve kids through age 14, many teens are in adult sizes.” 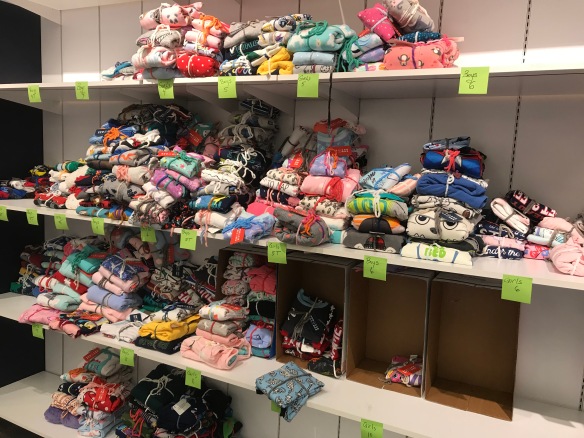 Currently, the group has storage space and folding parties at a location in Stonecrest Shopping Center. Many people also host their own in-home folding parties.

Folding parties allow participants to fold the pajamas, tie them with blanket yarn and attach a card. The cards read “May you feel warm and fully wrapped in the promise of God’s never-ending love for you.”

Ross and Vehr transport the pajamas, which they said usually go to Bright Blessings, A Child’s Place and (COS Kids) Christ Our Shepherd Ministries. From there, the pajamas are filtered to different agencies, where they are distributed to the kids.